The art project “Primera Pedra”, by the artist Jordi Fulla (Igualada, Barcelona, 1967), has become an aesthetic exploration of the cultural heritage of dry stone, a legacy that extends throughout the countries of the Mediterranean basin and contains the essence of the land… 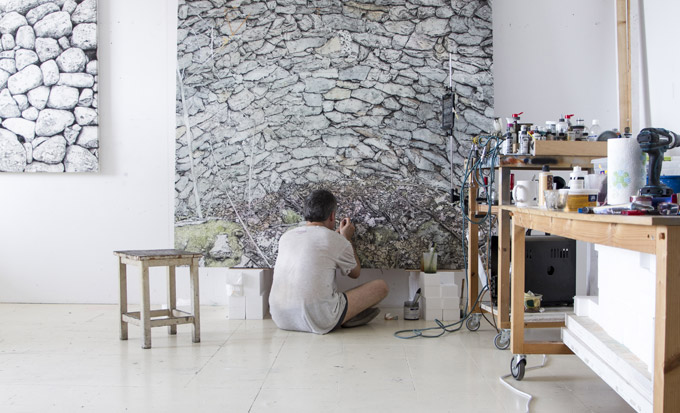 The art project “Primera Pedra”, by the artist Jordi Fulla (Igualada, Barcelona, 1967), has become an aesthetic exploration of the cultural heritage of dry stone, a legacy that extends throughout the countries of the Mediterranean basin and contains the essence of the land. 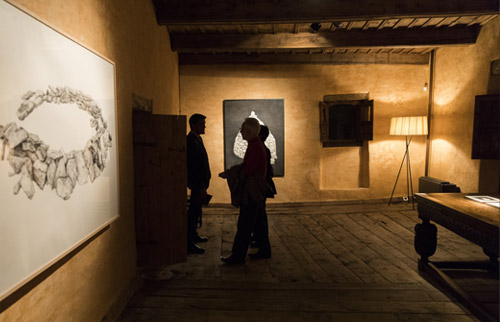 For centuries, humans evolved alongside nature and attempted to adapt the environment to their basic needs. However, with the arrival of the modern period and industrialisation, the dialectic that had existed until then was torn apart, giving way to a relationship of dominance, where nature is ransacked and subjected to the human will. So, it is not surprising that Martin Heidegger, one of the most significant thinkers of the 20th century, perceived a radical ambiguity in the phenomenon of modern technology. On the one hand, it reveals the destiny that emerges from existence itself, which could then lead to the emergence of a more primary relationship between the human being and being and, on the other hand, presents a greater threat to survival of the essence of man’s existence. To some extent, what the philosopher refers to is the dual image of technology – as an admonition and as a hope –, technology as an object (instrument) or an imperative for action in the world. The threat to human existence and at the same time the possibility of an ontological revolution do not lie in technology as an object, but as an imperative that encourages human beings to dominate nature. From this premise, which describes the “collective blindness” with which modern man anchors himself to the natural environment around him, we propose to contextualise this exhibition within a more ambitious project that aims to elaborate a story about the diversity of rural buildings in Andorra which, from an ethno-historical perspective,

“acquire great value as material evidence of the past and of the country’s own identity, making them worthy of study, divulgence, protection and conservation”.

On this basis, from the desire to examine, divulge and spread the knowledge that treasures this kind of rural construction, which is part of the history of humanity, Cal Pal, a 16th-century house in La Cortinada that was reconstructed in the 19th century according to the style of high-mountain buildings, opens its doors.

Accordingly, this exhibition by the artist Jordi Fulla, with about twenty paintings and drawings of various constructions spread across the country, becomes – so we say – the starting point for a more ambitious project which, entitled “La Primera Pedra”, will receive national and international specialist contributions and will, in turn, provide the substance for the two digital apps – a mobile app and a website – designed for this purpose. 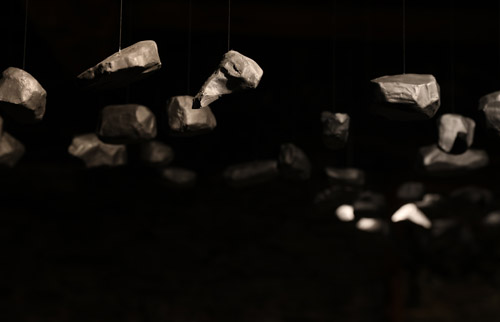 Josep Maria Esquirol – author of La resistència íntima. Assaig d’una filosofia de la proximitat, among other books – states in the chapter on mapping nothingness and the nihilist experience [1] that ancient mapmakers carried out explorations into unknown lands that led them to cross rivers, mountains and unknown places, over many days. Having exhausted themselves, they would sometimes manage to catch sight of the line of the horizon from which a great virgin landscape spread. From this desired and dreamed-of space, the explorers drew a great constellation which enabled them to make the plan. Yet this difficulty would become disconcerting when it was a matter of situating emptiness, which is the same as nothingness. Regarding our existence, the vacuum or nihilism that Nietzsche referred to seems to have changed into something dominant and mobile; an innocuous patina spreading aimlessly and at great speed to cover the vestiges of a past era. In this dominant, globalising, technological and nihilist context, humans feel the need to build a home, a space, a place to shelter and feel safe from the siege of existence itself. From this minimal settlement – such as a small hut in the middle of the woods –, man builds his own bastion from where to survey the world. Buildings seen as private habitats allow for the transposal of what is human; the walls within which we shelter – affirms Gaston Bachelard [2] – create a space for the human soul. Beyond the constructive rationality, the dwelling is the scenario that encourages our dream states, where we project a space for shelter, isolation, reflection… which the artist perceives “as whatever is nearest to our own skin”. “Construction of this personal hut is necessary – he states – not to protect us but rather to define a space for reflection”; constructions that Jordi Fulla discovered in the nineties when, while still a student, he had the chance to collaborate in a topographical project. Walking the land, he carefully observes the arrangement of these stone structures that are revealed to him as “memory containers”.

Constructions that, as the painter reminds us, “required no more than the leftovers of preparing the fields, stone, blending in with the physical, human and natural environment”. Beyond their functional purpose – for storage and shelter – these constructions “become catalysts of space and time”. 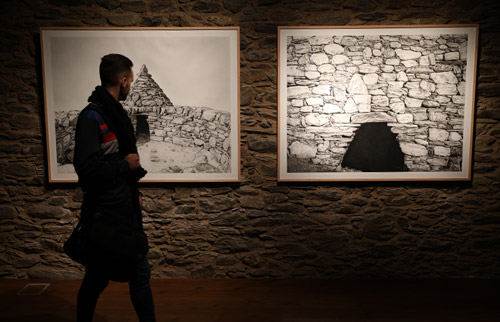 In effect, the dry-stone structures – orris (shepherds’ huts), huts and walls, among other typical structures of the Andorran valleys – reveal a primeval, intuitive architectural universe that sidesteps the nihilist time of the modern age. In this way, Jordi Fulla and Josep M. Esquirol mount a resistance. The absence of absolute truths – such as God, history or the State – has resulted in extreme individuality where the power of human action is definitive. In this context of scarce communication and compulsive immediacy, the artist projects a private room, where the pictorial act aligns with the process of construction of atavistic architecture. As Josep Maria Esquirol explains in his essay, “proximity (home, company, vegetable garden, intimacy…) is the path to presence and meaning. […] the fog of nihilism can never be wholly dispersed as it is part of the human condition. […]”. What can save us? – Heidegger asked. Not just a god, not just artistic creation, not just political rhetoric, also proximity.

Receive email updates about our exhibitions, events and much more: